From rabbit trails to an intricate web: keeping writing fun

That’s how I would describe my rough drafts, and I’m probably being kind to myself there. Way back when Nichelle first popped into my head locked in that car trunk and proceeded to pester me to write her story, I tried to make an outline. It did not go well.

It’s been a minute, but I clearly recall having her on a plane going to Florida to work on her story at one point in the outline. Writing along on the book, I thought: a crime reporter at a medium-market daily barely clearing a profit every six months is booking a last-minute flight to chase a story nobody really knows she’s working on? I know it’s fiction, but unless the story was set in the early 80s, that put it squarely in the fantasy category.

I discovered as I wrote that a lot of the things that sounded good in the outline either weren’t, or didn’t fit the story the way it was going. And my favorite thing about writing a new book, then and now, is opening my laptop every morning to see what happens next. I love it when readers tell me their favorite scenes, comments that often end with “I never saw that coming!” and I have to be careful to avoid sounding full of myself when I say “I know, right?” because what I mean isn’t that I think I’m that amazing, but that I didn’t see that thing coming either, until I was writing the scene and there it was. True story: I squealed right out loud in the Nashville airport working on SMALL TOWN SPIN, because of that very phenomenon. Sue Grafton used to call it “the magic,” and she was so right. There’re few things I enjoy more than getting into a scene I think is headed one way and having the characters go, “oh no, our way is so much better! Let’s do this!”

Eight (wow, really?) books later, I’ve abandoned outlines for notes scribbled on my erasable whiteboard and virtual post-its in the margins of my Scrivener files. I open the computer, re-read what I have so far (or at least what I wrote yesterday) and put my fingers on the keys to see what comes next.

My writer friends who outline always look aghast at this point in process conversations. They spend weeks making detailed chapter spreadsheets and covering their offices with charts and post-its, and I can tell my way makes them a bit squirmy. 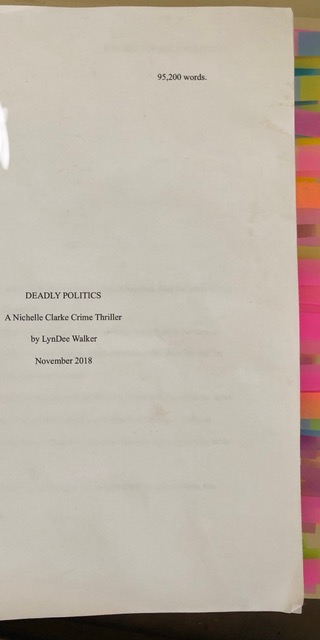 Fourth draft,​ and every flag there is something I found that needed correcting.

What I’ve found is that writing a novel takes the same amount of energy no matter how you go about it. I write merrily along for about four months, and then need six weeks or so to clean up the rabbit trails in the manuscript, make sure it all makes sense and have a finished file ready to turn in. My friends with the monster outlines spend a month making a plan on the front end, 3-4 writing the draft, and a couple of weeks tidying it up before they send it to their editors. I try to remember their front end work when I’m ferreting out dead storylines for the 24th day in a row.

With the new Nichelle Clarke novel, DEADLY POLITICS, I actually made an outline after the fact, something I’ve never done before. There were a lot of intricate pieces in a short timeline on this book, and it was helpful to have the list to see how everything intersected and make sure it all come together right. I think that may be a useful new step in every manuscript from here on out, but my messy rough drafts are my comfort zone, and I’m pretty sure they’re here to stay.